Quick Overview of the Ren and Stimpy Show

Happy! Happy! Joy! Joy! OK if you haven’t heard that before then you definitely need to continue reading on to learn all about the Ren and Stimpy show! This animated series was very popular in the 1990′s and to this day still has a cult following amongst those who loved the off-beat and often strange humor that was laced throughout every episode. This series arguably is the sole reason that spawned many adult oriented cartoons such as “South Park”, “Beavis and Butthead”, and the entire Adult Swim network. The show basically blazed a trail for a brand new type of cartoons and opened up a new demographic audience that networks still create content for today.

Brief Description of the Characters

Incase you are looking at the characters and wondering just what the heck these things are, Ren is the skinny little character and he is a dog, specifically a chihuahua….a very crazy, lunatic, borderline insane, filthy, emotionally unstable, and crude chihuahua, but nonetheless that is what he is supposed to be. Stimpy on the other hand is a cat. And he best described as goofy, silly, air-headed nimwit without much of a care or thought to what he says or does. There are many other characters in this series, and for a full lineup of the different personalities head over to our characters page.

History of the Show

1989- 1991 - The show was originally created by John Kricfalusi, who also did work on some other animated series. It began production in 1989 and work continued on the series for 2 years gearing it up for a primetime slot alongside of Doug and RugRats on the Nickelodeon network.

1991-1995 – In 1991 the pilot show had premiered on Nickelodeon. The TV series ran for 5 seasons on the network, despite some serious concerns and behind the scenes arguments over the content of the shows. Executives at Nickelodeon were growing increasingly unhappy about the lack of educational content within the show, and had several episodes pulled from the air, and others edited to remove controversial material. After some negotiations, Nickelodeon offered the original creator a buy out of his show, and an opportunity to take a back seat over the content, to which was refused. The TV series last episode ran in 1995.

1996 - In 1996, a single un-aired episode of Ren and Stimpy aired on MTV. This episode was the last episode from the final season entitled “”Sammy and Me/The Last Temptation”. Despite several requests from fans, even the controversial network MTV deemed the series a little too edgy and did not pursue any further agreements with John Kricfalusi.

2003 – 2004 – There was a very brief resurgence of the series in 2003 with the adult Swim Network segments on SpikeTV, however this was short lived due to the animation content being completely removed from SpikeTV.  The series took an even bigger step up in controversy with episodes having nudity, homosexual relationships, and of course more bodily fluid humor involving puking, boogers, poop, and more. Unfortunately Ren and Stimpy has not yet made a re-appearance to TV in a series or syndication since then.

2004 – 2007 - Over the course of these years, Paramount Studios released several DVD’s of the entire Ren and Stimpy seasons. All 5 seasons were made available on DVD, however some of the more controversial and banned episodes were removed from the DVD and did not make the final cut. 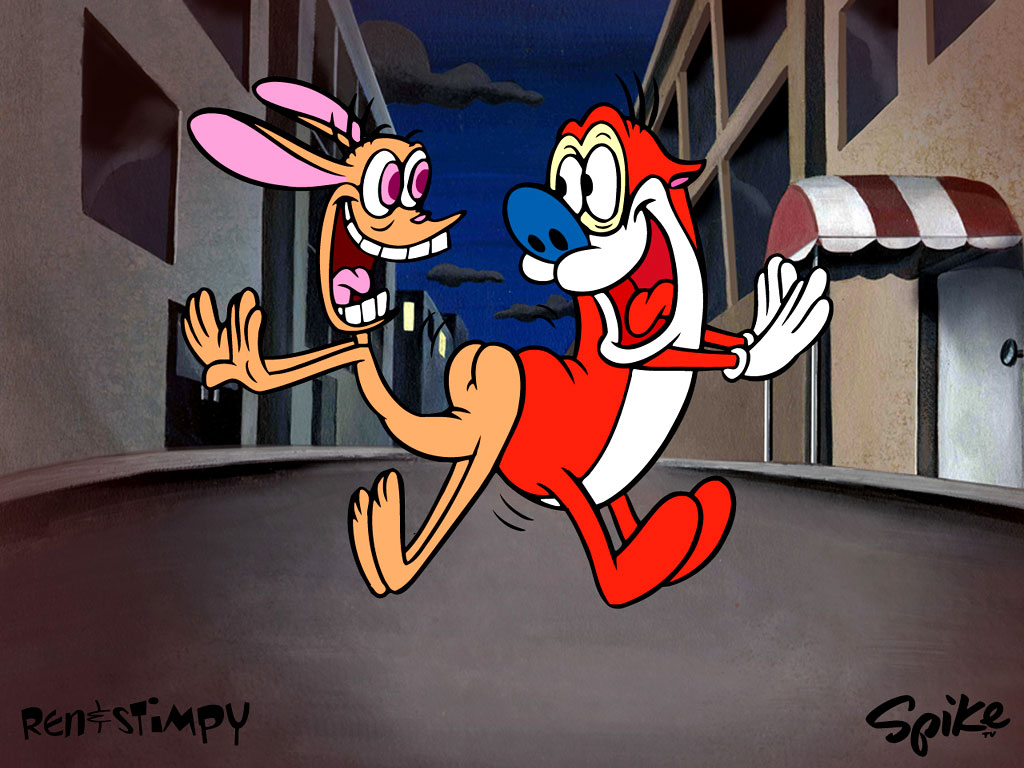